4 Ways To Make Coffee While Camping Sometimes the only thing worse than not having a steamy cup of coffee after a night in the forest is having to settle for instant coffee. Nothing beats a nice cup a joe before taking on a day of hiking but it can be a struggle in the morning to set up the fire or hot coals.

Before we talk about the 4 different methods of making your coffee, it’s important to note you can’t have good coffee without having a good water. A good water source and bringing your water to a light boil with just a few bubbles rather than rolling are essential.

You’re going to use a paper filter. The problem with the paper filters is that they will carry with them a little cardboard flavor so the first thing you want to do is just pour a little hot water on to that filter just like that and that’s going to take away some of that cardboard flavor. Once that’s done, scoop a couple of tablespoons worth of coffee into there. It doesn’t take a lot of coffee. I usually do about three tablespoons of coffee for the drip method. You just dump the excess water. And that’ll get you a nice, strong cup of coffee. Once that’s done, just pour it right over. You going to be pouring the coffee over the grounds for about two minutes. That’s usually about the best time. You want to make sure that you have a nice froth over the top, that means the coffee’s doing its thing.

The French press is nice, a lot of people love the french press. It doesn’t produce quite as strong coffee as the pour over or the drip method but it is a really nice smooth coffee. You’ll notice with the French press cup, it’s very tall and slender. This is not the best for actually boiling water in unless you have some really deep coals that you can get the heat coming from all sides. If I put this on top of the stove, it’s going to take a lot longer to boil than this wider cup will. There’s a lot more surface area to capture that heat. This has very little of it and this will hold about three cups.

You want to go ahead and pour that in. After you pour the grounds in here they’re going to just sit on the top, which means they’re not getting soaked in the water. They’re not steeping, they’re not doing their job. So, after you pour them in you want to make sure that you stir the grounds in. Put the top back on with the plunger all the way up, wait for three to four minutes, the longer you wait, the more bitter it’s going to be, so play around with the time, it’s really up to your personal taste. After those three minutes are up, just slowly push down on this until you hit the bottom. You can keep the coffee in here with the water about up to 20 minutes but remember, the longer you leave it in, the more bitter it’s going to be so after you’re done pushing the plunger down, you want to go ahead and pour your cup of coffee.

You just need the standard circular paper filter, a rubber band or a tight strip, whatever works. You just pour about 2 tablespoons, if you go more than that it’s going to be hard to tie off, it’s going to make the bag a little too big. The hard part with this is that no matter how much you put in here, it’s going to be tough to put the grounds in the center of it to be saturated. So if you were to take the teabag out and open it up, you’re going to see dry grounds on the very center. So, that means that you’re really not getting it.

This isn’t the best bang for the buck but it is a nice last resort method. You just fold it up like that, give it a nice twist and tie a rubber band to it and then dump it into your hot water to steep. Again, about 95 degrees is what you want. Doesn’t really produce the strongest coffee so if you’re a strong coffee drinker, this is not it. It’s going to produce a very weak coffee. Not my favorite but, it is a good option to have if you have nothing else.

Cowboy coffee’s cool because it requires nothing except for coffee and a cup and water. So, you don’t need any extra equipment, you don’t need anything fancy. You take your grounds, you dump them in your cup, mix them around with some hot water and then you drink it. Now, you’re going to get a lot of grounds in your mouth so a trick to drinking this safely is to pour a little cold water over the top after you’re done steeping the coffee and it’s going to cause the coffee grounds to really settle at the bottom and that will make it a lot more pleasant to drink. If you don’t use that tip, you’re going to get a mouthful of black grounds. 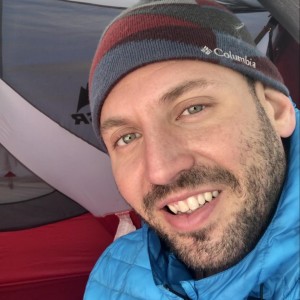